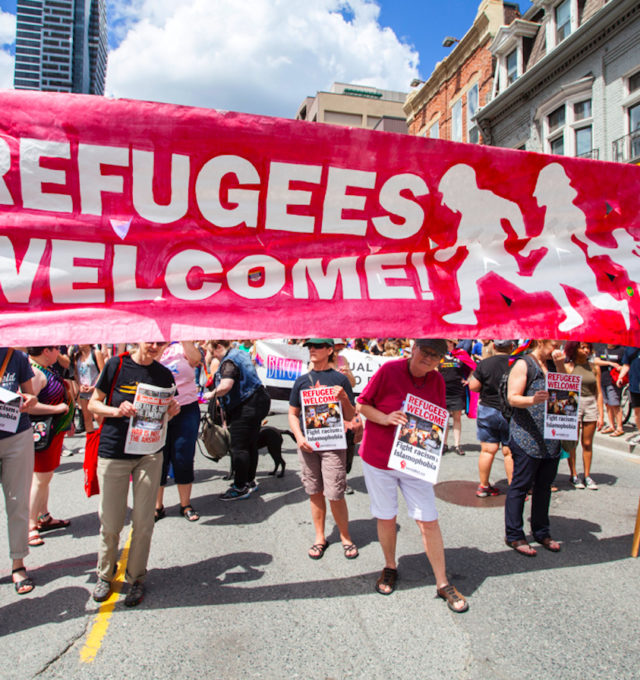 The next Canadian government must make changes to the refugee system to provide more pathways to safety for displaced LGBTQI+ people and all displaced persons.

On September 20th, Canadians will go to the polls to choose their next government.

Throughout this campaign, we haven’t seen a sustained conversation about refugee and asylum policy – in spite of the fact that we live during a time when over 84 million people around the world have been displaced from their homes due to a variety of reasons like war, persecution, climate change, famine or other disasters. Many of these people are defined as “internally displaced”, meaning people who have been displaced from their homes but have not crossed an international border seeking refuge. Around half of the roughly 84 million displaced people globally are internally displaced persons.

Against the backdrop of the global crisis of forced displacement, LGBTQI+ people continue to lack legal equality in many countries around the world. In 69 countries, same-sex intimacy is criminalized, punishable by prison time or even the death penalty. And in 14 countries, transgender peoples’ gender identity and expression as well as the sex characteristics of intersex people are criminalized. In our 2020 Annual Report, we provided a comprehensive overview of how this state-driven legal persecution negatively impacts LGBTQI+ people in families, public spaces and communities around the world. Often, discrimination and legal persecution is a catalyst to becoming a displaced person.

To address the interrelated crises of forced displacement and a global lack of LGBTQI+ equality, we’re calling on the next Canadian government to do the following.

Introduce a dedicated refugee stream and a crisis response plan for LGBTQ2 internally displaced persons, in partnership with Canadian LGBTQ2 civil society organizations, with a target of resettling 250 persons a year.

Canada’s refugee system is backlogged. Currently, there are 85,300 people waiting to be resettled into Canada. Given this, the government needs to expand the usage of a few of its existing tools to provide resettlement to LGBTQI+ asylum-seekers who are facing immediate threats and danger to their lives. Here’s what we’re recommending:

Civil society organizations like Rainbow Railroad have the on-the-ground networks and tools to identify and verify individuals facing extreme persecution based on their sexual orientation, gender identity and sex characteristics. Rainbow Railroad can act as a key referral partner to the government — identifying and triaging cases for resettlement through the government’s formal refugee channels.

You can read a more in-depth version of these recommendations in this report below. You can also download it directly here.

We need the Canadian government to do more now – for the millions around the world seeking lives of dignity and safety. The next Canadian Government must understand the importance of making changes to Canada’s refugee policies, to ensure Canada maintains its status as a leader in addressing the migrant crisis and global LGBTQI+ rights crisis.