Statement on the Situation of LGBTQI+ People in Afghanistan 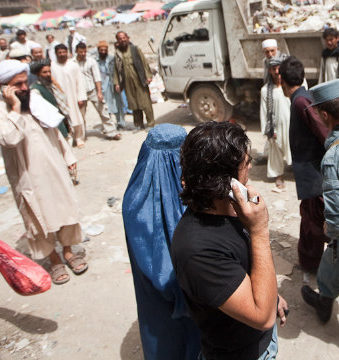 In the past few days, the security situation in Afghanistan has deteriorated rapidly.

The swiftness of the collapse of the Ashraf Ghani government and immediate attempts of thousands of Afghans to flee, has led to a potential migration and humanitarian crisis. There is great worry that the return of the Taliban will mean the return of grave human rights abuses, including the loss of basic human rights for women and girls, more gender-based violence and the extreme persecution of LGBTQI+ people.

Afghanistan already is not a safe place to be LGBTQI+. According to the U.S. State Department, public attitudes across the diversity of Afghan society towards LGBTQI+ people are extremely negative, which leads members of the LGBTQ+ community to keep their gender identity and sexual orientation a secret in fear of harassment, intimidation, persecution, and death. Now, with the return of the Taliban, there is understandable fear that the situation will worsen.

Rainbow Railroad is concerned that the return to power of the Taliban will lead to instances of extreme violence directed at members of the LGBTQI+ community in Afghanistan. And although it remains to be seen how the Taliban will respond to international pressure to uphold human rights, early signs are not encouraging. Just last month, a Taliban judge threatened that gay men will be crushed to death by toppling walls onto them should the group regain control of Afghanistan.

We are also concerned that this impending crisis will lead to a spike in request for help. So far in 2021, we have received 50 requests for help originating in Afghanistan, and we anticipate an uptick in requests due to the deteriorating security situation that threatens the safety of LGBTQI+ people. Moreover there are a limited number of human rights defenders in the country and civil society engagement is minimal, meaning that support for LGBTQI+ people from within Afghanistan is limited. However, we are currently relying on our deep international network and contacts within the country in order to reach people facing persecution.

Now is the time for governments to step up and support LGBTQI+ Afhgan refugees. On Friday August 13, the Canadian government announced that Canada will resettle 20,000 vulnerable Afghans threatened by the Taliban and forced to flee Afghanistan. The government also committed to introducing a special program to focus on vulnerable groups, specifically naming LGBTQI+ individuals. Rainbow Railroad is looking forward to engaging with the Canadian government to identify and refer LGBTQI+ Afghans in need of emergency assistance. We strongly encourage other governments to do the same.

At the same time however, we must not lose sight of the fact that we need more proactive policies to help LGBTQI+ persons in crisis situations. Whether it is state sponsored crackdowns on LGBTQI+ persons in Ghana or Uganda, the continuous migrant crisis in Venezuela, or refugees in Kenya and Turkey still awaiting resettlement, we need to immediately resume the resettlement of LGBTQI+ refugees – Rainbow Railroad is fielding 3000-4000 requests for help from around the world annually. Many need immediate support.

In the coming days, Rainbow Railroad will be providing further updates about the situation for LGBTQI+ people in Afghanistan on our social media as well as our ongoing work in the region and globally. Please follow us on Twitter and Instagram and like us on Facebook to stay up to date.