Breaking: An Important Announcement on Our Work in Afghanistan 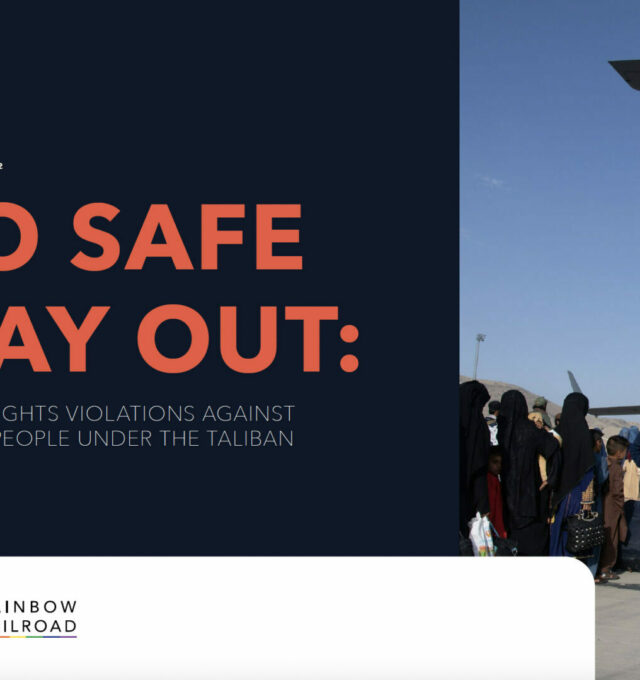 Home The Latest Publications Breaking: An Important Announcement on Our Work in Afghanistan

In the wake of our ongoing work in Afghanistan, we have some important news to share.

This news follows nearly a year of advocacy by which Rainbow Railroad specifically asked the Canadian government for the ability to partner in the resettlement of 300 LGBTQI+ Afghans who are in urgent need and imminently available to travel (through the #SafeWayOut Campaign). This advocacy included an appearance at the Canadian Special Committee on Afghanistan (found at the 14:33 mark in the video here). We were pleased that two of our key recommendations were adopted into the committee’s final report. You can read these specific recommendations below:

That the Government of Canada ensure that Immigration, Refugees and Citizenship Canada broadens the range of referral partners it is using to resettle Afghan nationals to include trusted non-governmental organizations that are active in Afghanistan and neighboring countries and that have knowledge of the applicant populations.

That the Government of Canada ensure that Immigration, Refugees and Citizenship Canada exercises its authority under section 25 of the Immigration and Refugee Protection Act to create a special immigration measure to urgently resettle at least 300 pre-identified LGBTQI+ Afghan refugees as Government Assisted Refugees and that this be in addition to the quota for the resettlement of 40,000 Afghans.

We were not sure that the government would respond to our advocacy – but they did, thanks to your help.

Over the course of the #SafeWayOut Campaign, thousands of supporters gathered signatures for our online petition, and advocated on social media. The campaign gained traction in Canadian media.

The result of this direct advocacy is that more LGBTQI+ Afghans will be able to find safety. Helping resettle so many individuals will be an arduous process that will require the support of our community – by the time everyone has resettled, we would have helped nearly 800 LGBTQI+ Afghans find safety in countries around the world.

But the need is still greater.

Since August 2021, Rainbow Railroad has received over 6,000 requests for help from LGBTQI+ Afghans. It is against this backdrop that we also launch a research report entitled No Safe Way Out: Human Rights Violations Against LGBTQI+ people under the Taliban, a qualitative analysis of LGBTQI+ persecution being perpetrated by the Taliban based on 1,739 requests for help submitted to Rainbow Railroad from Afghanistan between August 2021 and August 2022.

Kathryn Hampton,our Head of Impact is the primary author of this report and was struck with its findings.

In writing this report, it became clear how all-encompassing the threats are towards LGBTQI+ people in Afghanistan under Taliban rule,” This report is a jarring summary of violence faced by individuals suspected of being members of the LGBTQI+ community – violence they’re facing just for being who they are, or loving who they love. Conducting this research was heartbreaking and deeply alarming. Our recommendations are even more urgent following disturbing recent reports by Taliban officials of public floggings of LGBTQI+ people before thousands of onlookers.” – Kathryn

It’s also important to note that this year, Rainbow Railroad has received 9,502 requests for help to-date, including thousands of LGBTQI+ people who are requesting help from around the world. This includes LGBTQI+ Iranian refugees seeking refuge in Turkey, persons waiting in Kakuma, Kenya or individuals stuck at the US/Mexico border, among many others displaced in their own countries. We have much more work to do. 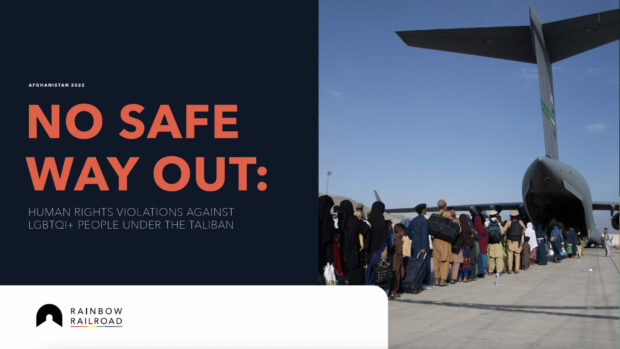