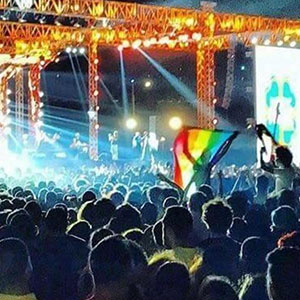 According to recent public opinion surveys, 95% of Egyptians do not accept LGBTQI+ identities and do not believe society should progress with acceptance and rights. The Egyptian penal code is usually weaponized against the LGBTQI+ community. People are regularly arrested for immoral or indecent behavior. The Egyptian police can be extremely violent, and work with state actors in order to seek out activists and allies of the LGBTQI+ community.

In 2017 the famous Lebanese band Mashrou Leila performed for 30,000 people in the capital of Egypt, Cairo. The lead singer of the band, Hamed Sinno,  is an openly gay, cisgendered man. In an act of solidarity and pride, a group of young LGTBQI+ persons held up a rainbow flag at the concert while Sinno sang. A wide spread, state-led anti-LGTBQI+ crackdown followed immediately after the concert. Conservative media outlets and religious leadership condemned the activists, and 60 individuals were arrested in the immediate aftermath - many more would be identified and arrested in the following weeks and months.

Persecution of the LGBTQI+ community has not significantly changed or improved since the crackdown. Individuals are still being targeted, imprisoned, tortured and abused at the state and community level, and requests for help continue to pour in.

Rainbow Railroad was involved in supporting individuals from Egypt prior to the crisis following the Mashrou Leila concert  in 2017, however we had limited options for persons evacuation due to the complexity of relocation of internally displaced persons from the Middle East.

When the crisis hit we responded immediately in partnership with a number of international human rights organizations and grassroots LGBTQI+ organizations and activists based in Cairo. We were able to relocate 12 survivors of the crisis. We continue to work in the region and relocate individuals on an emergency, case-by-case basis.

Rainbow Railroad continues to support our partners on the ground, who, for security reasons, we cannot disclose. We are monitoring legal cases and will alert stakeholders if wider advocacy is required.