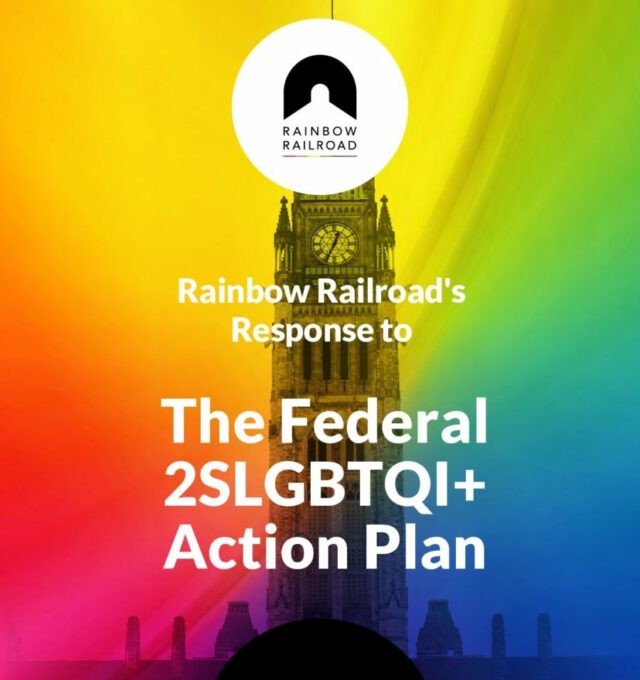 As of May this year, there are more than 100 million people who have been forcibly displaced worldwide by persecution, conflict, violence, and human rights violations. Against the backdrop of this global crisis, LGBTQI+ people continue to lack legal equality in many countries around the world. Often, discrimination and state-sponsored persecution are catalysts in an individual becoming displaced. Vulnerable LGBTQI+ refugees need additional targeted and expedited resettlement pathways that take into account their unique vulnerabilities within this system.

Canada’s first ever Federal Two-Spirit, Lesbian, Gay, Bisexual, Trans, Queer, Intersex+ (2SLGBTQI+) Action Plan was released on August 28th 2022 after an extensive consultation process with civil society, including with Rainbow Railroad. The fact that Canada has unveiled a plan at all is significant and worthy of recognition. Only a few countries have action plans that center the 2SLGBTQI+ community and even fewer specifically mention Indigenous peoples.

However, while the plan aims to “advance and strengthen 2SLGBTQI+ rights at home and abroad,” it lacks specificity in key areas which will limit its impact on the ground. As a civil society organization asked to provide input in advance of the plan, there are crucial elements missing from the plan, especially actions and commitments that are directed at the International LGBTQI+ community, asylum seekers, and migrants which are needed to truly advance Canada’s leadership in human rights abroad.

We believe this presents an opportunity to get it right going forward. As such, we propose that the Federal Action Plan implement four policy measures which the Government of Canada can activate to make the 2022 Federal 2SLGBTQI+ Action Plan more inclusive of marginalized 2SLGBTQI+ populations:

1. Strengthen the Government’s support of international 2SLGBTQI+ communities through the development of measurable objectives included in a white paper designed to advance 2SLGBTQI+ rights abroad, and to be implemented and tracked across government agencies including Women and Gender Equality, Immigration Refugees and Citizenship, and Global Affairs Canada.

2. Create an Ambassador to 2SLGBTQI+ Communities Internationally, similar to the U.S. Special Envoy to Advance the Human Rights of LGBTQI+ Persons created by the U.S. Department of State.

3. Significantly increase international development aid targeting LGBTQI+ communities, and implement this immediately. $10M annually does not meet the global need, and the current plan does not see this implemented until 2025.

We will seek opportunities to discuss the incorporation of these recommendations into a new, equitable, and inclusive iteration of the 2SLGBTQI+ Federal Action Plan with government officials.

You can read a more in-depth version of these recommendations in this report below. You can also download it directly here. 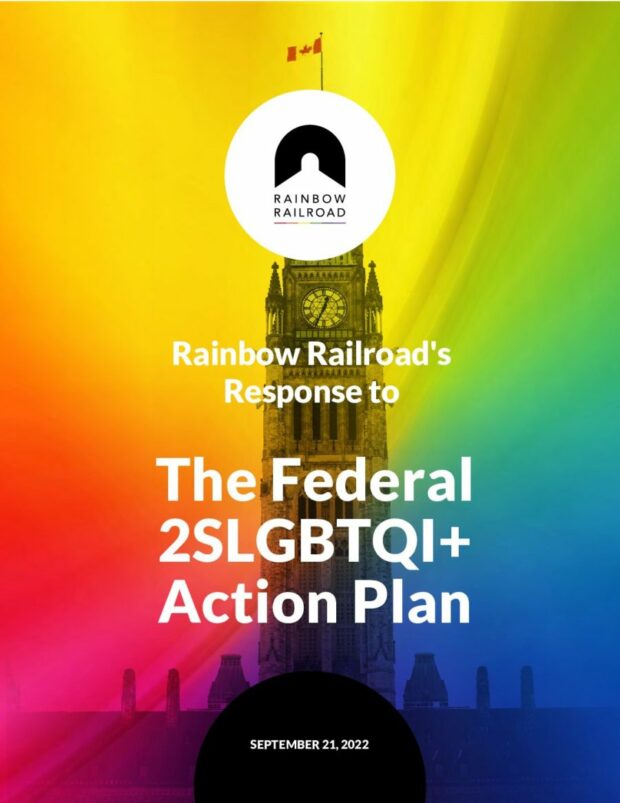