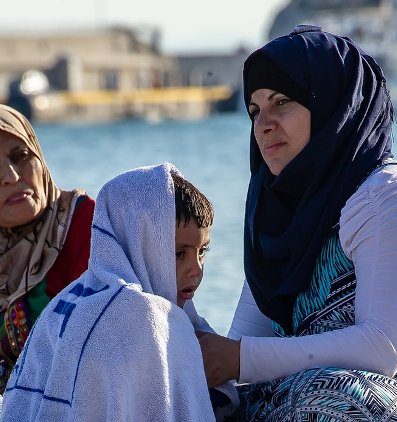 Now that we are well into the vaccination phase of the pandemic, it is vital that the country ensures that its refugee system is accessible for all, including LGBTQI migrants, especially as the discourse around “vaccination passports” heats up.

As the wealthiest and most powerful nation on the globe (which is also seeing declining infection and death rates), the United States is in a unique position to set a standard that maintains the health of its citizens while making sure that vulnerable migrants and asylum seekers aren’t barred access due to lack of a “vaccination passport.”

In the right context these passports can have value (although they must not cause discrimination, nor violate the right to privacy). However, but what they must not do is exacerbate inequalities here or globally, such as create more barriers to asylum seekers.

Early in the pandemic, many countries closed their borders to attempt to curb the pandemic. And while some may have succeeded in containing the virus, the pandemic has had a disproportionate impact on refugees and otherwise displaced citizens who are unable to flee their country of persecution. Border closures, shuttered embassies, and a reduction of capacity have led to the lowest refugee resettlement numbers in almost two decades. Despite an estimated 1.44 million refugees in urgent need of resettlement globally, just 22,770 were resettled through UNHCR, the UN Refugee Agency, last year. An abysmal failure for human rights by any measure.

LGBTQI refugees have been particularly affected. At the start of the pandemic, Rainbow Railroad warned that the pandemic could lead to increased persecution of LGBTQI people, evidenced by police raids of LGBTQI groups in Uganda and, most recently, Ghana. Unfortunately for many, our findings rang true.

“Vaccine passports” stand to make matters worse if they impose yet another barrier on refugees in their already perilous journey to safety. Implementing such passports without taking into account displaced persons and asylum seekers would all but ensure that fewer people will get the help they need.

Though the World Health Organization is still working on international standards for vaccine passports, they are quickly becoming a reality in countries eager to return to “normal life.” In Israel, where 80 percent of the adult population is fully vaccinated, a vaccine certificate program called “Green Pass” has already been established which lets inoculated individuals enter gyms, restaurants, and movie theaters. G20 countries are similarly poised to back such passports in an effort to boost tourism. And in the United States, New York is counting on its Excelsior Pass to help the state get up and running again.

But such passports could exacerbate the divide between the haves and have-nots, essentially creating a “vaccination class” that further targets the world’s most marginalized.

Already, rich countries (including the United States) with 14 percent of the world’s population have secured 53 percent of all vaccines. Oxfam International has dubbed COVID-19 the “inequality virus” as the disparity between the global north and south widens. In the west-central African country of Cameroon, for example, only 400 doses have been administered so far in a country of over 25 million people. Refugees, displaced persons, and asylum seekers — many of whom come from the global south — might now be denied entry into countries that require proof of vaccination.

Prior to the pandemic, the United States’ refugee system helped many people reach safety. Instead of adding more roadblocks, the United States must ensure that any “return to normal” is centered on protecting the world’s most vulnerable populations — that means resisting any vaccination passport system that excludes those less fortunate.

Kimalhi Powell is the CEO of Rainbow Railroad.